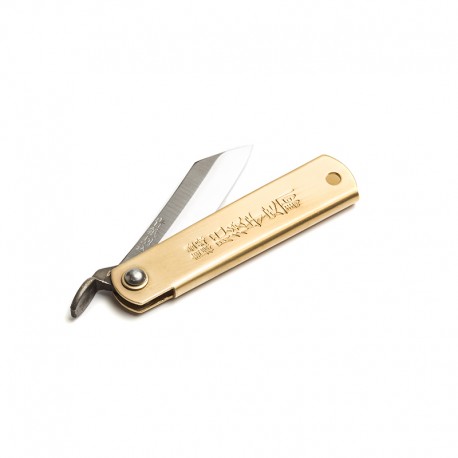 The Higonokami history goes all the way to 19th century to Miki City, Japan. Back then, the knives were all hand crafted. Steel was placed in iron mold and forged into required shape. Sheaths were made either from brass or blackened iron. They were richly adorned with portraits, flowers, animals or landscape motives. In 1894 the company introduced all new pocket knife „Higonokami Knife“, which was a massive success even with Japanese court. In 1899 „Higonokami Knife Union“ was founded and during its best years, the union had up to 40 companies. Higonokami registered mark was registered in 1910 and became a part of traditional knife making in Japan.

After decline on knife making scene of Japan in fifties of 20th century, all production returned to original factory, where first Higonokami model was created. Since then, only Nagao Kanekoma Factory continues production. This five generation family enterprise is currently led by Mr. Mitsuo Nagao.
Today, Higonokami knives are made in many versions, which may look similar at the first glance. Different costs however reflect quality of used materials and difficulty of manufacturing process.

We display availability of product with each individual item on our website. What does it mean?

The goods are in stock at our store and can be purchased immediately. Orders submitted till noon of workdays are dispatched on the same day, later orders will be processed next working day.

Specific date of stock availability, such as 02/2018 or 01/02/2018, means we already ordered the items from suppliers and the order is confirmed. Date displayed is the expected day of parcel dispatch to your address.

The items are currently out of stock. The days inform how often we resupply at our suppliers. Since we can’t guarantee stock availability of our suppliers, please take this info as usual lead time.

We are currently out of stock and we don’t have confirmed order from the supplier so it’s not possible to give any specific date.

Be the first to write your review!